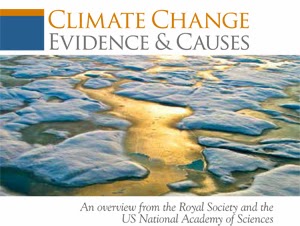 A new report was issued on February 26, 2014 by two of the world's foremost scientific organizations: The US National Academy of Sciences and The Royal Society in the UK. Climate Change: Evidence and Causes documents the science behind man-made climate change, and does so in a manner that is more accessible to the lay public. From the web page:


The report goes a long way toward communicating the science. It presents the technical issues in a concise, clear, "Question & Answer" format. Each question is answered with a highlighted conclusion followed by a longer explanation, which usually includes one or more relatively simple graphics that make the data more easy to understand. Overall, the report is a good example of how to communicate science.

What I like about the report is that it clearly states the questions that most policymakers and educators want to know. The first question: Is the climate warming? The second: How do scientists know that recent climate change is largely caused by human activities? These two fundamental questions are answered clearly. Yes, the climate is warming, and the reason we know that human activity is the major cause is summarized.

It's common for the public to be confused on a variety of climate change related issues, in part because of the complexity of the science but also because of the organized disinformation campaigns of lobbyists. The National Academy and Royal Society present the answers to these questions. What role does the sun play? Is the current level of CO2 unprecedented? Does the rate of warming vary from decade to decade (and why)? How confident are scientists that the Earth will warm further over the coming century?


Every major question is addressed in a way that can be understood by scientists and non-scientists alike. And the answers are clear - the planet is warming and human activity is the primary cause.

To help get the word out, a  live webcast and discussion of the report release is scheduled for Thursday, February 27, 2014 from 10:00-11:30 am EST. More information can be found on the release web page.


While this report, along with the recent and forthcoming more extensive reports from the IPCC and other scientific bodies, won't stop the lobbyists from misrepresenting the science, it does do a good job getting the science across to a wider audience. It is likely still too technical, however, for much of the general public. Therefore, it is imperative that other organizations, video producers, science writers, teachers, and other communicators take this information and make it even more accessible. Communication doesn't stop with issuing a report. It starts.
Posted by The Dake Page at 8:47 AM