97 Hours of Climate Consensus...and the "Rebuttal" by Climate Science Deniers

It has been a fascinating week in climate science, in at least two ways that are illustrative of the public debate about the state-of-the-science. And it all stems from something called "97 Hours of Consensus," an internet campaign designed (literally) by John Cook and his colleagues at Skeptical Science.

The idea behind the campaign is to use caricatures of 97 active climate scientists (drawn by John Cook himself), along with quotes about the science by each, to highlight "the fact that 97% of climate scientists have concluded that humans are causing global warming." According to Cook:

Each hour, beginning at 9am Sunday EST, September 7th, we'll publish a statement and playful, hand-drawn caricature of a leading climate scientist. Each caricature lists the scientists’ name, title, expertise and academic institution.


There is even a super-cool website showing all the caricatures together in a 3D format that you can rotate. Better yet, hover your cursor over each scientist and you can make them move - and their quote pops up on your screen. The "97 hours" ends on the morning of September 11th (EST) and has been garnering a lot of attention. A huge number of people have been tweeting and retweeting the clever graphics using the hashtag #97Hours, as well as sharing on Facebook. Here's an example, featuring Michael Mann: 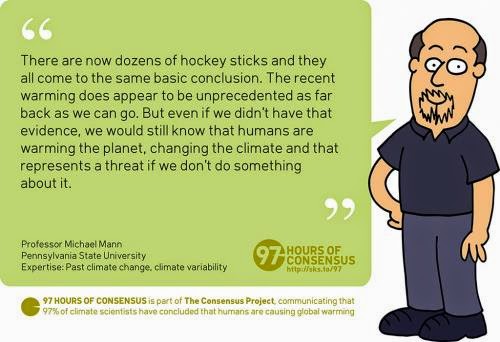 In case you missed the significance, the 97 alludes to the various scientific studies that have been conducted, including one by John Cook and colleagues, that show at least 97% of active climate scientists agree that the data overwhelmingly (and unequivocally) demonstrate that human activity is causing the planet to warm. The consensus is based on millions of data points, hundreds of thousands of peer-reviewed scientific papers, decades of research, thousands of scientists' work, and well-known physics. Every major scientific organization and all the world's National Academies of Science concur with the fact that we are warming our planet.

But the campaign also is revealing in another way - the response. The idea that nearly every active climate scientist agrees on global warming is a major threat to the climate science denier lobby, so like other things they find threatening, they attack it and its authors. One of many attacks on Cook's "97 Hours of Consensus" campaign took place on a Facebook page called "Climate Change Discussion" (CCD).

While ostensibly open to anyone, CCD is functionally dominated by climate deniers. As with most denial blogs, there are a handful of folks who seem to be constantly posting and commenting on the posts of others. Invariably what they post is wrong, either intentionally or unintentionally. But the site is a microcosm of other blogs so it is useful to do a quick catalog of the kind of tactics that are used by denialists.

When people honestly knowledgeable about the science post (whether they be climate scientists or simply others who have taken to time to learn the facts), they invariably cite some reliable scientific source and accurately present the data with the proper context (at least within the limits of a FB post), along with a link to that valid source.

In contrast, those who deny the science of man-made climate change reflected by the consensus generally cite unreliable sources. When they do deign to cite an actual scientific organization (e.g., NASA or some journal article), they usually reinterpret/misinterpret it. But the vast majority are sources that are easily seen as unreliable, many of which have been debunked so routinely as to wonder how anyone could not be too embarrassed to cite them. To give some examples, the following is a list of "expert" sources cited in response to the "97 Hours" campaign:
This list is necessarily incomplete but representative of the kind of "expert" sources offered by the handful of climate science deniers who dominate the CCD page. But it reflects exactly what you see on every site where public opinion conflicts with the realities of the science. In nearly every case, the source is unreliable and the information provided has been debunked repeatedly.

To this litany we can add a myriad of silly memes ridiculing scientists and personal attacks on John Cook, Dana Nuccitelli, and other authors of published studies. Overall, the postings by denialists reflect the practice of spamming the feeds of social sites with the usual falsehoods, misrepresentations, and misperceptions. All done with a confident swagger. And, needless to say, all divorced from the scientific reality.

Meanwhile, the planet continues to warm.

So here we have contrasting strategies in science communication. On the one hand, John Cook and Skeptical Science (and the participating climate scientists) use humor to present quotes accurately reflecting the scientific community and the state-of-the-science. On the other hand you have some non-scientists spamming a Facebook page with a series of misperceptions, misrepresentations, and misunderstandings coming from a bunch of non-science bloggers and lobbyist-funded front groups, along with the more-than-occasional personal attacks.

That says a lot.

This is the first in a series of periodic posts exposing climate denialism. Stay tuned for more of the tactics and tall tales of the climate denial industry.

[Note: Graphics by John Cook on Skeptical Science]
Posted by The Dake Page at 8:30 AM

The advantage we deniers have is that we are not beholden to truth and accuracy. We are free to use whatever rhetorical gimmicks and tricks works most effectively. In fact, not only is our reputation not damaged by illogic and irrationality, it actually grows our audience and reach.

In this regard, you guys are fighting us with both hands tied behind your back.

However, our depth is shallow. Though we might be able to easily reach the 10 to 20% of our audience who is ideologically aligned with us, we have to work doubly hard for the rest of the audience. We aren't very influential with them.

Not to give you guys advice, but I think if get the influencers in society to advocate for your cause you will have a good shot at beating us. That's why I was so unhappy to see Leo DeCaprio stumping for you guys.

PS, you can learn more about me, climate denialist, Tony Heller, on my blog: http://tonyhellerakastevengoddardisnotasociopath.wordpress.com/