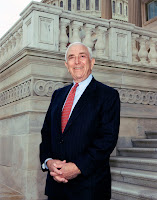 The Philadelphia Inquirer is reporting that Senator Frank Lautenberg will try once again try to reform the nearly four decade old Toxic Substances Control Act. According to an article by Sandy Bauers published online, Lautenberg plans to introduce his newest version of the Safe Chemicals Act on Wednesday.

The Democratic Senator from New Jersey has been trying since 2005 to get passage of a TSCA reform bill. The most recent attempt in 2012 made it out of Committee on a partisan vote, only to die from lack of interest in the full Senate. Recently Republican Senator David Vitter has indicated that he was working on an alternative, chemical industry-backed, bill.

The Bauers article can be read here.

The announcement is now on Senator Lautenberg's site.

A summary is here.

A trade association, the American Chemistry Council, thanked Senator Lautenberg for his commitment, but indicated it was encouraged by "efforts in the Senate led by Senator David Vitter (R-LA) to develop a new proposal." Senator Vitter is expected by some to introduce a competing "industry" bill later in the month.

Another trade association, the Society of Chemical Manufacturers and Affiliates (SOCMA) issued a press release today that did not mention Lautenberg's bill specifically, but called for a more piecemeal approach through "bipartisan cooperation."

According to the summary from Senator Lautenberg's office, the bill is identical to the one passed out of Committee last summer. That bill was never taken up for debate during the limited remaining legislative calendar during the election period. By reintroducing the bill Senator Lautenberg hopes to rejuvenate the discussion of much needed TSCA reform. Given the current political climate it is likely that no action will be taken until Senator Vitter's competing bill is offered.