Lautenberg Steps Down as Chair of Toxic Chemicals Subcommittee 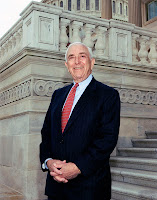 Senator Frank Lautenberg of New Jersey, long a champion of efforts to reform the Toxic Substances Control Act (TSCA), will no longer chair the Superfund, Toxics, and Environmental Health Subcommittee of the Senate Environment and Public Works Committee. Lautenberg, of course, has introduced several versions of a Safe Chemicals Act over previous Congresses.

Replacing Lautenberg as chair will be Senator Tom Udall of New Mexico. Barbara Boxer of California chairs the full EPW Committee. David Vitter of Louisiana had already replaced Senator Inhofe of Oklahoma as ranking minority member of the committee. The main reason given for the change to Udall on the toxics subcommittee is that Lautenberg has taken up the chair for the Financial Services subcommittee of the Senate Appropriations Committee and simply will not have time. Lautenberg is up for reelection in 2014, though at 90 years old it seems unlikely he will run.

Meanwhile, Lautenberg expects to continue his push for TSCA reform during the current Congress, and with Vitter apparently working with industry to craft a counter-bill, it is possible that we'll see some sort of TSCA reform bill at least reach debate.