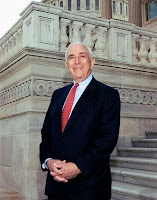 Senator Frank Lautenberg has introduced the Safe Chemicals Act of 2011.  He had introduced a similar bill last year, and bills also versions in 2008 and 2005, all in the hopes of reforming/modernizing the Toxic Substances Control Act of 1976.  The new bill builds on the 2010 bill by incorporating feedback received in a series of hearings with "industry leaders, public officials, scientists, doctors, academics, and non-profit organizations."

Changes made to improve the bill include inclusion of risk-based prioritization categories, for which industry lobbied and the EPA likes because it allows them to "focus...resources on the highest-risk chemicals." As with the earlier bill it requires chemical companies to "submit basic hazard and exposure data to quickly determine the risk and assess the need for further testing or restrictions."

Of course, the real question is less what is in the bill as whether it will ever be taken up by the Senate.  Previous bills never made it out of committee, and given the unlikelihood of the Republican-held House introducing a similar bill, we may just see the Senate bill languish in committee once again.  Then again, the Senate is still controlled by the Democrats (at least until the next election) and Lautenberg has shown amazing persistence and passion for protecting human health and the environment, so we may see the Environment and Public Works Committee hold hearings in an attempt to set the stage for action in future Congresses.

A summary of Lautenberg's bill as presented in his press release is below. Click on the links for The Text or A Summary of the bill.


Highlights of the “Safe Chemicals Act of 2011”

Provides EPA with sufficient information to judge a chemical’s safety.  Requires manufacturers to develop and submit a minimum data set for each chemical they produce, while also preventing duplicative or unnecessary testing and encouraging the use of rapid, low-cost, non-animal tests that provide high quality data.  EPA will have full authority to request additional information needed to determine the safety of a chemical.

Takes fast action to address highest risk chemicals.  Requires EPA to take fast action to reduce risk from chemicals that have already been proven dangerous.  In addition, the EPA Administrator is given authority to act quickly if any chemical poses an imminent hazard.

Ensures safety threshold is met for all chemicals on the market.  Places the burden of proof on chemical manufacturers to prove the safety of their chemicals.  All uses must be identified and determined safe for the chemical to enter the market or continue to be used.

Promotes innovation and development of green chemistry.  Establishes grant programs and research centers to foster the development of safe chemical alternatives, and brings some new chemicals onto the market using an expedited review process.
Posted by The Dake Page at 2:34 AM