Book Review - The Climate Fix: What Scientists and Politicians Won't Tell You About Global Warming, by Roger Pielke, Jr. 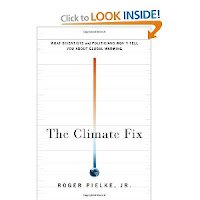 Since the Pielke's (father and son) are often in the climate discussion news, I figured this would be a good book review to post here.  That said, the book is primarily for policy wonks and not so much for the general public. Pielke, Jr. is a well known political science professor and blogger who often blogs on climate change issues. His father, Roger Pielke, Sr., is a renowned climate scientist, so while Pielke, Jr. is not a climate scientist per se, he does bring considerable insight garnered from years of interaction with his father and his own career that includes working as a student assistant at the National Center for Atmospheric Research and elsewhere.

Not surprisingly, the title is a misnomer since the book doesn't actually offer a "fix" to man-made climate change. If it were that easy there would be no need for his book. The publisher's subtitle "What scientists and politicians won't tell you about global warming" is unfortunate, because it attempts to create a controversy where there really is none.  Publishers do that to sell books.  Beyond that distraction, the book is generally well-written and focuses in on the real problem - what policy options do we have to deal with climate change. This point in itself is important as Pielke, Jr. acknowledges up front the scientific consensus that climate change is happening, that human activity is the primary reason, and that carbon dioxide and other greenhouse gases are major factors in the warming of the planet. That scientific point put aside, he focuses the majority of the book on policy.

The author spends a lot of time talking about decarbonization policies around the world, what has worked and what has not worked, and his views as to why. Pielke discusses the concept of an "iron law of climate policy," which essentially acknowledges that any policy that might be construed to cause short-term adverse economic impact cannot be implemented. Needless to say, this creates a significant barrier to policy action. Here also, in my opinion, is revealed one weakness of the book, as he tends not to discuss how certain protectors of the status quo take advantage of this "iron law" to create false understanding of the potential for such adverse economic impact. This follows along with the few places where Pielke digresses from policy to find fault with scientists' not being perfect but overlooks the intentional disinformation campaigns of the denialist community.

But those are minor quibbles in what I would consider a very worthwhile book. Pielke explores in great detail the trials and tribulations of various economic policy options, and addresses the limitations of geoengineering as a long-term adaptation alternative. He also discusses his view of "how climate policy went off course." Some of what he says I do not agree with, and some of what he says I agree with wholeheartedly, but in both cases he addresses the issues thoughtfully and honestly (though not without his own bias). Perhaps the most important contribution of this book is how he communicates the difficulties that stand in the way of taking much needed policy action. While he clearly doesn't offer a "climate fix," anyone interested in finding a policy path forward, and is wonkish enough to get into the details, will find Pielke's book an informative view of the issues. For scientists and the general public, I would recommend Pielke's earlier book, The Honest Broker.
Posted by The Dake Page at 5:34 AM