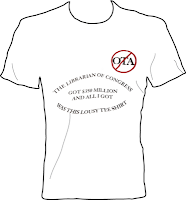 Believe it or not, Congress once had a science office. The Office of Technology Assessment (OTA), from 1872 to 1995, provided research and reports to Congress on a variety of important science issues. Targeted first during the Reagan years, the OTA was unceremoniously defunded during the Gingrich "Contract with America" era. But a coalition of 90 environmental and health advocacy groups want it back.

The coalition, which includes such diverse members as Friends of the Earth, OMB Watch and Republicans for Environmental Protection, have formally requested that Congress allocate an unspecified amount of funding to reinstate the OTA. Technically, they argue, the OTA wasn't actually abolished, just defunded, and as such would simply need funds appropriated.

Unfortunately, I don't see this happening. While the economy does seem to be (begrudgingly) improving, the current economic conditions of the US remain tentative. And a plausible argument could be made that the functions of the OTA are being met by the General Accountability Office, the Congressional Research Service, the Library of Congress, and the National Academy of Science.

Another option could be a proposal by the Woodrow Wilson International Center for Scholars called "Reinventing Technology Assessment." It emphasized "citizen engagement" and suggested that a "nationwide network of non-partisan policy research organizations, universities and science museums" could be created, which they called the Expert & Citizen Assessment of Science & Technology (ECAST) network.

Either way, Congress clearly needs to rely on actual science when making decisions.
Posted by The Dake Page at 9:05 AM