No Time to Lose on Climate Change!! Angela Merkel Lectures the US Congress 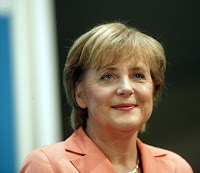 These are the words of German Chancellor Angela Merkel today in an address to a joint session of the US Congress.

And she didn't stop there. She also said that dealing with climate change is one of the great tests of the 21st Century and that "in December the world will look to us, to the Americans and the Europeans," for leadership.

Most Republicans sat quietly during this while Democrats gave Chacellor Merkel a standing ovation.

I agree with Chancellor Merkel. Climate change is the test of our lifetimes. The Democratic majority and President Obama understand this and are taking a leadership role in guiding both the US and the world toward finding solutions.

Meanwhile, the Republicans dither. They whine that "EPA hasn't done an analysis of the impact," which, of course, is false. EPA has done an analysis. Republicans whine that they "don't have enough time to read the bill," though the major issues have been discussed for the last 9 months, the revised draft bill has been available for at least a week (and the original bill was available long before), and the process of discussion is ongoing. Perhaps if Republicans assigned their staffs to work on the bill rather than immediately find a microphone to whine about it they would actually be able to accomplish their jobs.

Merkel noted that "curbing greenhouse gas emissions would spur growth in innovative jobs" in the US, in Europe, and worldwide. Republicans seem intent on doing nothing but stand in the way of any meaningful legislation because they think it will help them keep their own jobs in next year's elections.

It's time for all of us to insist that Republicans start contributing to the solution rather than putting all their efforts into blocking any attempt by others to look out for the future of the United States.

For more information, read the articles in the Washington Post, BBC News, and CNN.
Posted by The Dake Page at 9:38 AM