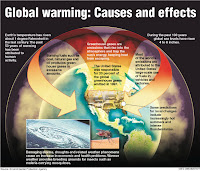 According to the IARU, "the 36 page report is written for non-specialists and is based on discussions and presentations made at the scientific congress “Climate change: Global Risks, Challenges & Decisions” held in Copenhagen in March."

The report is organised into six key messages:

1. Climatic Trends. Recent observations indicate that many aspects of the climate are changing according to the more severe IPCC projections. Sea level rise is changing at even greater rates than IPCC projections and new modelling methods suggest a rise of around one metre by 2100. Since 2007, Arctic sea ice has rapidly decreased. Recent work has indicated that the vulnerability of natural carbon sinks will further amplify these changes.

2. Social and Environmental Disruption. Although a 2ºC rise is the quoted threshold above which climate change is deemed dangerous, this level still has significant risks for society and the environment. For example, modelling studies indicate that a 2ºC temperature rise would double the death rate caused by heatwaves. Increasing atmospheric CO2 is causing acidification of the oceans and threatening marine ecosystems. There are already reports of 19 per cent decrease in the growth of Great Barrier Reef corals.

3. Long-term strategy: Global targets and timetables. Recent studies indicate that if the peak and subsequent decline of greenhouse gases (GHGs) does not occur until after 2020, emission reduction rates will have to exceed 5 per cent per year to meet the 2ºC threshold. Immediate reductions are needed with a long-term expectation that carbon prices will rise.

4. Equity Dimensions. The impacts of climate change are greater for the poor, the uneducated and the isolated. In a 2050 world of 9 billion people, carbon emissions per capita will need to be about 2 tonnes of CO2 per annum, or less, to avoid dangerous climate change. Current per capita emissions vary widely. For example, in the USA they are over 20 tonnes and in China (which has the greatest total emissions) they are 4 tonnes.

5. Inaction is inexcusable. Renewable energy technologies are already available and, combined with reduced energy use and improved efficiency, they have the potential to achieve a 50 per cent decrease in GHG emissions by 2050. There are also positive developments in land management, deforestation and transport.

6. Meeting the Challenge. Cultural dimensions of climate change need to be included in research and policy. For example, a recent analysis indicated that 12 billion people could be nourished on less than one third of the present agricultural area by using the best sites for the most appropriate crops. Linking climate change with broader consumption and production issues can help sustainable development but will require long-term global deals.

The full report can be downloaded at the IARU conference site here.