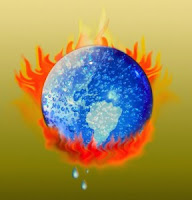 "U.S. EPA released a long-sequestered document on global warming today showing the George W. Bush administration had concluded in December 2007 that greenhouse gas emissions from motor vehicles were endangering public welfare and needed to be regulated under the Clean Air Act."

This is how the New York Times opens its article today.

"This draft finding demonstrates that in 2007 the science was as clear as it is today," EPA spokeswoman Adora Andy said. "The conclusions reached then by EPA scientists should have been made public and should have been considered."

The original endangerment finding document was written by Jason Burnett, a top adviser to then-EPA Administrator Stephen Johnson. According to the Times article,

"There was a lot of political pressure during the Bush administration to suppress it after they decided to change course," Burnett said today. "It didn't support their new position."