Scientist Norman Borlaug, "Father of the Green Revolution," Has Died 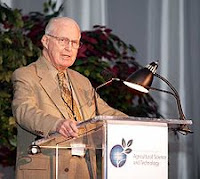 The man known as the "father of the green revolution," agricultural scientist Norman Borlaug, has died at the age of 95.

Many probably have never heard of Norman Borlaug, but he arguably did more to increase crop yields and reduce hunger in developing countries than any other individual. His research and activism in bringing the benefits of that research direct to the farmers both here and abroad led to a movement that came to be known as the "green revolution." And because of it, world food production more than doubled in the thirty years between 1960 and 1990. In two countries that benefited most from the new crop varieties, Pakistan and India, yields of wheat and other grains more than quadrupled over that period.

While most scientists toil without recognition for most of their careers, Borlaug was one of only five people who have won all of the Nobel Peace Prize, the Presidential Medal of Freedom and the Congressional Gold Medal. To that he can add the Padma Vibhushan, which is awarded by the President of India to "recognize exceptional and distinguished service to the nation in any field..." According to his Wiki article, Borlaug's discoveries have been estimated to have saved over 245 million lives worldwide (others estimate the green revolution averted global famine during the second half of the 20th century, which saved perhaps 1 billion lives worldwide). His work in India and Mexico are well known in agricultural, scientific, and humanitarian circles.

Needless to say, with an impact that large there were also criticisms. The green revolution, and Borlaug's programs involving genetic cross-breeding of plant species, were seen by some as being unnatural. In addition, large scale monocultures (picture a large expanse of wheat or corn fields) tend to reduce biodiversity, in addition to often increasing the amount of pesticides and fertilizers used, which can be damaging to the top soil and the subsistence farming of rural families in under-developed areas. Another concern is that these techniques create large profits for agribusiness and agrichemical corporations while widening social inequality in the recipient countries. While these concerns may be valid, Borlaug felt that keeping people from starving more than compensated for any of these drawbacks.

Scientists who speak out for the science (even if it's just to correct the misrepresentations that others make of that science), are sometimes looked on with disdain both by those for whom the science is ideologically inconvenient and by pure scientists who feel the scientist should remain in the lab and let others handle policy. Borlaug had a different philosophy. According to a wonderful article just published about him:

We should remember that without scientists informing our policy-makers, our rivers would still be catching fire, our neighborhoods would still be exposing us to toxic waste, our country would have never made it to the moon, our air would still be thick enough to see (and kill), and our existence and that of many other species on this planet would come into question.
Posted by The Dake Page at 1:46 PM