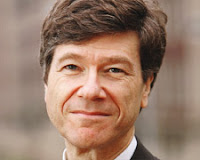 An underlying theme of this page is how science meets policy. In a recent commentary, UK scientist and Professor Jeffrey Sachs, director of the Earth Institute and special adviser to UN Secretary General Ban Ki-moon, says that "getting understandable science information to policy makers remains a great challenge." I agree. As I noted in Sunday's Dake Page, some with political or ideological motivations often try to obfuscate the science. Professor Sachs suggests "the effective flow of information from the scientific community to the public and to policy-makers, and the systematic application of that information in policy-making remains a great and growing challenge." He opines that "the Bush administration exemplified a government that ignored, distorted, and even disdained scientific information, to the enormous cost to the US and the world."

To counter this, Professor Sachs offers five areas of action "to improve the link between science and policy."

First, he says "the general public must broadly understand scientific issues such as climate change in order to be able to call for and endorse sound public action. Yet the scientific issues are inherently complex, and the public arena is filled with misinformation (by innocent error) and disinformation (by calculated misdirection) by vested interests. To overcome the confusion, it is vital to establish processes such as the Inter-Governmental Panel on Climate Change (IPCC) that inform the public of the boundaries of real knowledge and consensus, especially based on the peer reviewed literature. Other venerable scientific institutions and societies (such as the Royal Society or the National Academy of Sciences) can also play this role."

Second, he states that "the public must be informed of the consensus in an intelligible manner." That is something that is sometimes difficult for scientists, who Sachs says, "notoriously neglect to be intelligible, usually not in order to be intentionally obscure, but rather to avoid the imprecision of non-scientific, day to day language." He also suggests that "science journalists (with proper scientific training), the media, and scientist-statesmen are needed to play an important role in translation."

Third, Sachs says that "policy-makers need detailed and systematic inputs beyond the broad public debate." He touts the US President's Council of Advisors on Science and Technology (PCAST) as "a vital institution." Sachs believes it is a good step that President Obama has "revitalised it by appointing world class scientific leaders."

Fourth, he emphasizes that "science needs to inform public policy systematically, not only through advising the executive and legislative branches (and indeed, often, the judicial branch), but also through a seat at the table in rule-making and public decision-making." Sachs is highly supportive of "government bodies such as environmental agencies, national laboratories, and standard setting bodies," and suggests that they need "not only their own internal experts, but also panels of independent (non-governmental) scientific experts, free from conflict of interest, and beyond the reach of politics or governmental bureaucratic control."

Sach's fifth and final recommendation is to note that "while expertise is vital...it is not enough." Ultimately, he says "we can't leave...decisions to the scientists, though we want the scientists very close to the ultimate decisions, and to express their views strongly and publicly." Rather, he suggests that the "ultimate decisions depend on democratic processes and consensus building around the scientific evidence that are needed to combine scientific knowledge with ethical guidelines, public values, and a sense of justice, fairness and social cohesion."

While he says that "this meshing of science knowledge and ultimate democratic decision-making is a never ending challenge,...the general commitment to the combination of scientific rigour, public consensus and democratic accountability should be a guidepost for action and institutional design."

In short, scientists and policy-makers must communicate, with each other and with the public.

Read the original commentary here.
Posted by The Dake Page at 1:52 PM