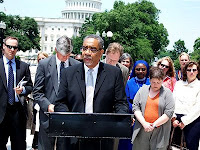 Just a few days ago I reported that it was likely that the House Subcommittee on Commerce, Trade, and Consumer Protection was planning to hold hearings soon on reform of the current chemical control law in the United States. Well, seems that "soon" is now Thursday, as in this Thursday, February 26th in the Rayburn House Office Building.

The Toxic Substances Control Act (TSCA) has been in place virtually unchanged since 1976, and there have been increasing calls to make changes to the law over the last few years. The current Chair of the House Energy and Commerce Committee, of which this Subcommittee is a part, is Henry Waxman, who introduced the House version of the Kid Safe Chemical Act (KSCA) back in 2005 and cosponsored the 2008 version introduced by Representative Hilda Solis.

The subcommittee in charge of running hearings on TSCA reform is chaired by Representative Bobby Rush, of the 1st Congressional District in Illinois. Some may remember Rush from his rather controversial speech at the news conference in which now-impeached Governor Blagojevich announced he had appointed the now-embattled Roland Burris to fill now-President Barack Obama's Senate seat.

It is expected that this will be the first of several hearings that take place in both the House and the Senate prior to the reintroduction of the Kid Safe Chemical Act. While the KSCA seems likely to be introduced, there is also pressure to come up with a more workable reform of TSCA, perhaps one that incorporates the current and proposed enhancements to the EPA ChAMP program.
Posted by The Dake Page at 1:52 PM