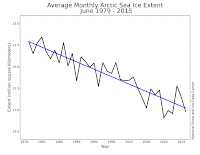 We've talked about several of the tactics used by climate deniers to intentionally mislead the public. This past week provided a prime example of one tactic - intentionally lying about what a study says. Let's take a closer look at how this works.

Recall that the climate denial industry, in their role as lobbyists, are well-experienced in manipulating public opinion. Going back to the days of tobacco companies denying smoking causes cancer, they learned to develop a network of "manufacturers" (i.e., to manufacture doubt), "spreaders" (to get the doubt out there), and "repeaters" (to saturate the blogosphere with misinformation). This process was described earlier.

The misinformation process is often employed to spread their own non-science opinions, other non-peer-reviewed and unsupported blog posts, and the occasional paper they get through the peer-review process. But it works also when they want to spin (i.e., misrepresent) the findings of actual real scientific papers by actual real climate scientists. Such is the case this past week when the blogosphere became saturated with a false conclusion drawn from a presentation made at the Royal Astronomical Society meeting held in Wales.

The Maunder Minimum was a period of time popularly linked with the "Little Ice Age," a perhaps overzealous term given to a period of excess cooling in some parts of the world (mainly the UK) from around 1550 to 1850.

So here is the tactic: Denier lobbyists and their media partners take the study findings and then wildly extrapolate far beyond anything the study authors said or the study shows. Suddenly the "similar solar activity conditions" are transmogrified into the falsehood "predictions of another Little Ice Age." There is absolutely no basis for this extrapolation, and is contradicted both by the evidence of the study they claim said it (it didn't) and the evidence of multiple other studies that show continued - and even expanded - warming for the foreseeable future.

Let's reiterate to make the tactic clear to all:

1) Grossly misrepresent the study being cited, often ignoring the actual conclusions and other evidence, to create an unsupported and inaccurate misrepresentation (i.e., fairy tale) of the study.

2) Get an accommodating media reporter to present the gross misrepresentation.

3) Ensure the gross misrepresentation is spread wide and far on the lobbyist-fed media and ideologically plagiarized blogosphere.

The key to this strategy is to saturate the internet and media with the false story line and to keep people from reading the actual study and actual results and actual conclusions. Since most people don't have access to the original study (especially since it hasn't even been published yet), it isn't hard to spread the fairy tale version in its place. Climate denier lobbyists know this, and they exploit it.

So now everyone is getting the false information rather than the real information. Eventually the deception of the deniers is revealed but the denier lobbyists don't care because they've already achieved their goals. They know none of their ideological followers will care that the falsehood has been debunked. In fact, they know that their followers will claim any debunking to be part of the "global conspiracy" by all the world's climate scientists for the last 100 years. Yes, the lobbyists relish the fact that they can manipulate their followers so easily.

For the rest of us, however, it's important to keep debunking the falsehoods and to keep exposing the tactics used by lobbyists and their partners in collusion to mislead the public and influence policy-making. Such is the goal of this series on exposing climate denialism.

Posted by The Dake Page at 8:00 AM No comments: Links to this post