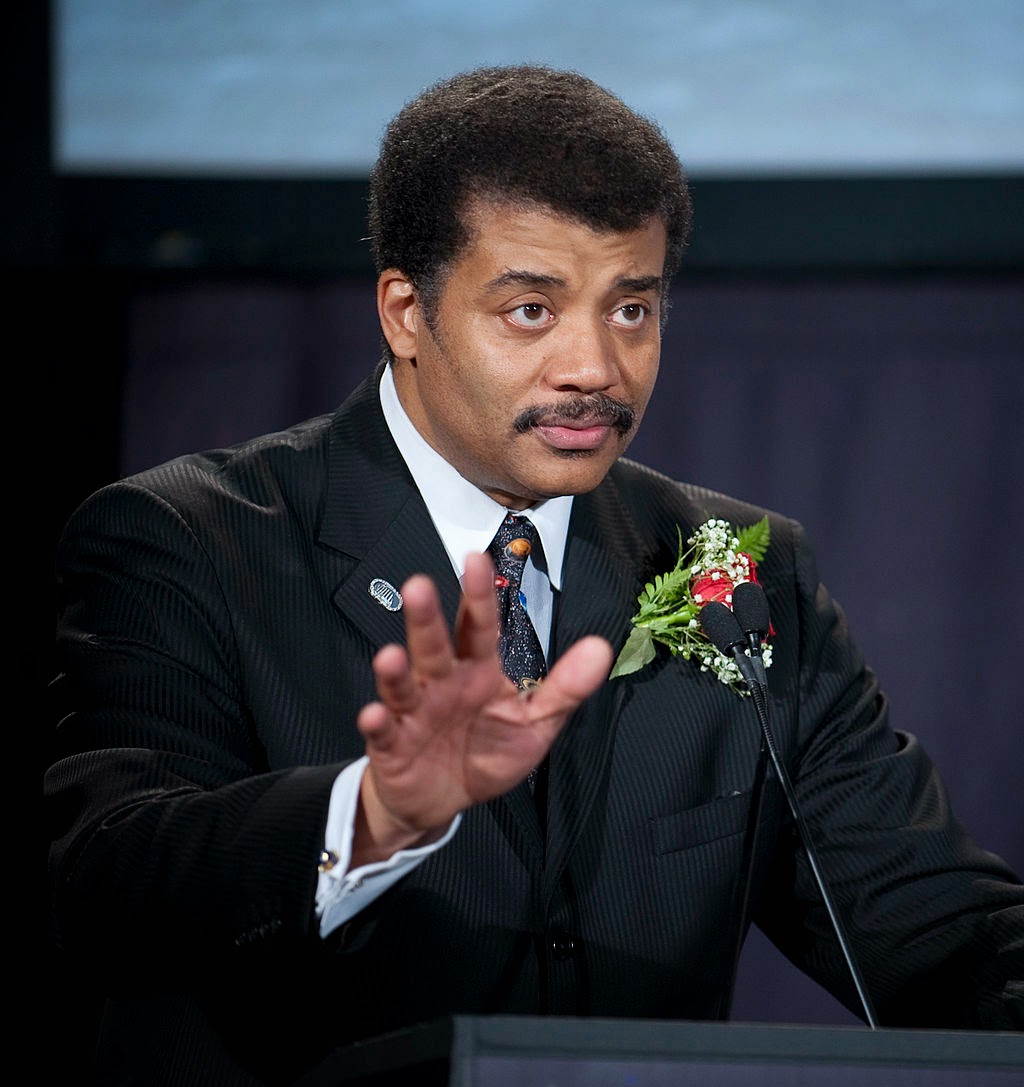 Neil deGrasse Tyson is an astrophysicist. More importantly, he is also a science communicator. In his day job he is Director of the Hayden Planetarium, part of New York City's American Museum of Natural History. That in itself is pretty cool. Even cooler is that Tyson is a popular "television scientist," by which I mean a real scientist who is on television a lot (not some actor on television who plays a scientist). His natural ability to talk science to non-scientists, with a dash of humor, makes him an extraordinary exemplar of how scientists can communicate science to the public.

Older folks will see a bit of Carl Sagan in Tyson. Both were astrophysicists who leaped from the ivory tower into the public eye. Both communicated science in ways that everyone could understand. And now, Tyson is doing a remake of Sagan's famous science series, Cosmos. Better yet, while Sagan's 1980 version was on PBS stations, Tyson's 2014 Cosmos is on, some may say "ironically," the much more widely accessible Fox networks.

While Cosmos covers a variety of topics, the one I'll focus on here is a single, short video that helps explain the simple difference between weather and climate. Take a look:

As Tyson says, "keep your eye on the man, not the dog." Climate is the long-term trend, something that we can see happening based on millions of data points. We can also evaluate and project the trend into the future based on physical and chemical laws and reactions. Weather, on the other hand, is highly variable from day to day and place to place. This is a fairly simple concept but one that is often confused by the public, in part because there are vested interests who intentionally mislead the public in an effort to avoid policy action.

Tyson's video is actually drawn from an earlier video using the same concept. This time the walking dog is used to illustrate the difference between trend and variation.

Again the man represents the long-term trend. When the analogy is applied to global warming it is the track that global average temperatures are on given the continuing emissions of carbon into the atmosphere and oceans. The dog represents the variability in temperatures; some years are warmer than average and some years not as warm as the average. This short-term variation is influenced by short-term events that effect weather, like the periodic El Nino events that tend to bump up temperatures and the La Ninas that tend to suppress temperature rises. These variations give any temperature graph its ragged look (the dog's tracks). In contrast, the trend is shown by the line of the man's steps. And like the global temperatures around us, that trend is going up.

There is no guarantee that everyone in the public will get the twin concepts of climate/weather and trend/variation, but these two videos using a wandering dog on a leash are an excellent means of communication. More scientists should present their work in simple video form. And perhaps more scientists should follow Tyson's lead and appear on television. I suspect Jon Stewart of the Daily Show would be happy to have you.
Posted by The Dake Page at 9:06 AM No comments: Links to this post