Book Review – Hell and High Water: Global Warming – the Solution and the Politics - and What We Should Do by Joseph Romm 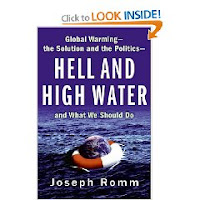 Climate change is here...and there is hell to pay. Hell and High Water is a must-read book for everyone interested in global warming and climate science. Joseph Romm holds a PhD in Physics from MIT, was acting assistant secretary at the Department of Energy in the Clinton Administration (in which he headed the Office of Energy Efficiency and Renewable Energy), and founder of the Center for Energy and Climate Solutions. Many will be familiar with Romm’s writing in the blog, Climate Progress, and Time Magazine has called him “the Web’s most influential climate-change blogger.”

As the title of this 2007 book suggests, the contents are split into two main parts. In Part I, Romm tells us the state of the current science, and then takes us through the likely scenarios for the near future (2000-2025), the intermediate near future (2025-2050), and the slightly further near future (2050-2100). As time passes – and as inaction continues – we advance through increasingly frequent and severe climatic events to what Romm calls “planetary purgatory” in which intense drought is seen in some areas while other areas (e.g., coastlines) experience intense flooding. Finally, barring significant action that begins now, we face “hell and high water,” irreversible global warming and sea level rise. Romm supports these scenarios with facts and the full backing of the scientific consensus.

In Part II, Romm takes us through the politics and the solutions. He informs us that we already have the technology to begin dealing with the situation, and to do so before the situation worsens to the point where solutions are much more difficult to initiate. So we can solve this problem. What is missing is the political will. Confounding this is the intentional disinformation being forwarded by free market lobbying groups whose masterful use of rhetoric confuses the public and makes it incredibly difficult for policy-makers to take the needed action. Try on this advice from Frank Luntz in his infamous 2002 “straight talk” strategy memo to conservatives wishing to deny and delay action on global warming:

“It can be helpful to think of environmental (and other) issues in terms of a story. A compelling story, even if factually inaccurate, can be more emotionally compelling than the dry recitation of the truth.” [my emphasis added]

In other words, at least in the climate change denialist book, lying is okay if it gets your desired point across. And according to Romm this is exactly what the global warming deniers and delayers have been doing. The goal is delay, delay, delay...deny, deny, deny.

But Romm also offers solutions. A lot of solutions. And most are based on technologies that already exist today and can be carried out if policy-makers are allowed to put them into practice. Solutions that include putting a price on carbon that can be traded in such a way that companies that reduce their emissions will make money. Solutions like plug-in electric cars (not hydrogen fuel cell cars, which Romm suggests is more of a shell game to delay action than a viable technology). And many more.

In his concluding chapter, “The End of Politics,” Romm says that the public – you and me – need to demand change. He notes that everyone must become a “climate champion” that will take whatever action we can to put policy-makers in a position where they can honestly implement adequate policies. Romm says that he does “believe that if we fail to act in time, it will be the single biggest regret any of us has at the end of our lives.”

This book is a powerful look at the problems we face with global warming, the solutions that already exist to deal with it, and the politics that keeps us from implementing them. It is a easily readable book for everyone, whether scientifically trained or not. I highly recommend this book for all to read. Readers can also keep up with Romm’s continuing efforts to debunk climate change deniers at http://climateprogress.org/.
Posted by The Dake Page at 3:18 PM No comments: Links to this post

Will he or won't he? That's the question that people worldwide have been asking regarding whether US President Barack Obama will go to the United Nations Climate Change Conference (COP15) scheduled for December 7-18, 2009 in Copenhagen, Denmark. All indications are that the answer is Yes, He Will.

In an interview Monday with Reuters news agency, Obama said

"if I am confident that all of the countries involved are bargaining in good faith and we are on the brink of a meaningful agreement and my presence in Copenhagen will make a difference in tipping us over edge then certainly that's something that I will do."

My bet is that he will. In fact, barring some major incident that keeps him at home, I think he will make a point of going to show that world that the US is serious in its desire to take a leadership role in developing solutions to climate change. It is important that he demonstrate that the noise coming from the Republican minority will not stop the US from setting caps on greenhouse gas emissions, even if climate change legislation doesn't make it through the Senate before the meeting in Copenhagen.

Progress has been slow, both in the US and the international community. The previously hoped for major breakthrough agreement is now a distant memory, but there is optimism that COP15 will result in a "framework" agreement. According to President Obama in his Reuters interview,

"I think the question is can we create a set of principles, building blocks, that allow for ongoing and continuing progress on the issue and that's something I'm confident we can achieve."

He also continues talks with China, who with the US make up the two largest emitters in the world, and remains confident that they can agree on a framework that will then be the basis for additional efforts.

So we will see. But my bet is on Obama being in Copenhagen in the chill of winter.
Posted by The Dake Page at 10:07 AM No comments: Links to this post