A new poll out concludes that "an overwhelming majority of Americans (87%) say it is important that candidates for President and Congress have a basic understanding of the science informing public policy issues." This belief is bipartisan, with both Democratic and Republican voters (as well as Independents) agreeing that in our modern age science has a large and necessary role in making policy. But there are some caveats.

The poll was commissioned by ResearchAmerica (a polling organization) and ScienceDebate.org (a non-profit organization). Analysis of the data collected from over 1000 U.S. adults was done by Zogby Analytics.

Results show a clear desire by the American public for presidential candidates and members of Congress to include science in their decision-making. You can see a PDF of the summary slides at this URL. (Be sure to scroll down to see all the graphs and tables.) There are a few take-away lessons from the poll.

First, a vast majority of the public believe that public policy must be based on the best available science. 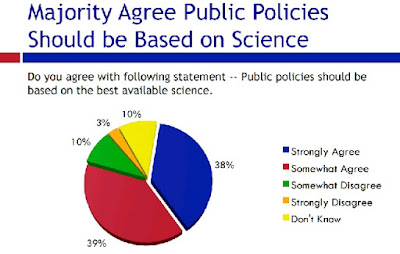 The public also believes that candidates should be required to have a basic understanding of the science necessary to govern: And that majority is (somewhat) non-partisan, with Democrats, Republicans, and even Independents agreeing that basic science understanding is important. 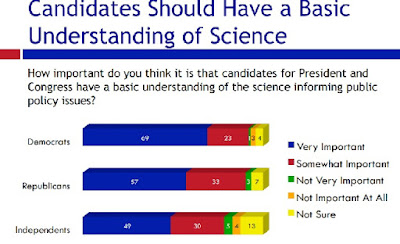 As the graph above shows, Democrats are somewhat more likely to believe science understanding is necessary (92% [very + somewhat important]) than Republicans (90%) and Independents (79%). These trends are reflected in most of the other graphs in the study. (see PDF for full results).

What does this all mean?

The main messages from the poll are that Americans believe science is important, that it should inform policy decisions, and that the presidential and congressional candidates have an obligation to have at least a basic understanding of the relevant science needed for decision-making. These beliefs are held across all Americans no matter what their party affiliation.

At least that is what they say.

The reality is much more revealing. While the vast majority of the public proclaims that public policies should be based on the best available science (77%), less than half of that same public (45%) believe they are even somewhat informed about the positions of the candidates on science.

Furthermore, what people are saying in response to poll questions doesn't appear to accurately reflect their voting habits. In the poll, strong majorities of both Republicans and Democrats say they believe in science and that candidates should too, but that clearly isn't the case in real life. For example, all the Republican candidates for President have repeatedly and aggressively touted their disdain for climate science, offering up various forms of denial as a matter of course. Even those who previously supported action and whose home states are most at risk (e.g., Florida, Louisiana, New York, California) have denied the science. And yet they lead the polls. Clearly Republican voters answer questions differently than they demand from their candidates.

One note about the "Independents." In many of the bar graphs splitting out responses by party, Independents often show less support for science than Republicans. At first this would appear counter-intuitive, but it reflects a change in how people identify themselves. In the past, "Independents" were generally the more moderate voters who didn't wholesale identify with either the Democratic or Republican parties, and may vote either way depending on the candidates. Today the number of voters who fit this description is shrinking. In our hyperpartisan era, a growing percentage of self-identified "Independents" are actually the more extreme wings of the two parties. They may be "tea partiers" and libertarians who believe the Republican party is too moderate (yes, you read that correctly). The mainstream party to these people are RINO (Republican in Name Only), and so they identify themselves as "Independent" even though the chances of them ever voting for Democratic candidates are close to nil. To a much lesser extent, "Independents" may also include the more extreme liberal wing of the Democratic party (who disdain DINOs), or the anti-science folks such as anti-vaxxers. While those on the extreme wing represent a small percentage of the Democratic party and their wackier views are generally not incorporated into the Democratic platform, the extreme wing of the Republican party now IS the Republican party, with its most egregiously extreme anti-science views driving the entire platform and actions of the party. [For a good review of the political state of affairs, check out Thomas Mann and Norman Ornstein's book It's Even Worse Than it Looks.]

What should we do about it?

While in the responses to the poll questions Americans say they want science, they also admit to not really understanding science; continue to be misinformed about climate science, GMOs, vaccines, and other science important for decision-making; and about half the country overwhelmingly supports candidates who fundamentally deny even basic scientific principles. Some of this can be attributed to the extreme partisanship evident in today's politics, as evidenced by Republicans viciously attacking their own policy proposals as soon as President Obama and the Democrats agree to them. But some of it is because the majority of Americans don't even know the candidates views on science-based policy initiatives. 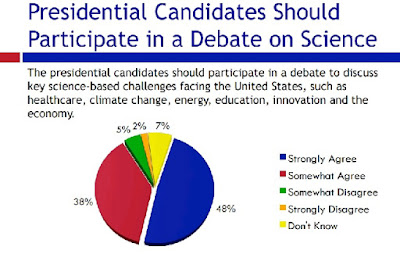 Americans strongly agree that presidential candidates should be required to participate in a science-based debate. At least 86% of respondents strongly or somewhat agreed with this proposal. ScienceDebate.org (one of the organizations that commissioned the independent poll) has worked hard to have candidates participate (see here for more information of past participation). Candidates would have a chance to present their proposals for addressing policy needs presented by such issues as climate change that are inherently based on science. The public would then be able to make informed choices. 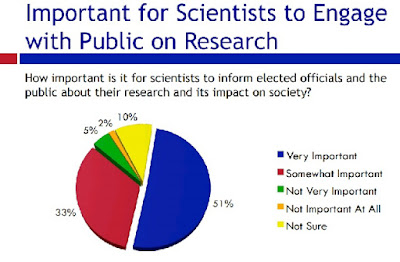 Finally, as the above graph shows, Americans overwhelmingly believe that scientists should engage directly with the public and inform elected officials about scientific research that impacts decision-making. This has been a theme for The Dake Page for a long time.

It's time for a Science Debate.
Posted by The Dake Page at 9:35 AM No comments: