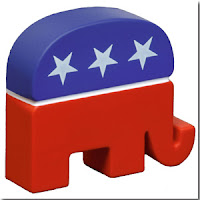 The online newspaper Politico is reporting that Republican Fred Upton, chairman of the House Energy and Commerce Committee, is considering the possibility of using the debt-ceiling debate "as a vehicle for provisions that would limit federal climate change rules.  "  Upton’s bill to void "EPA’s power to regulate greenhouse-gas emissions" passed in April in the House, but failed when Senator James Inhofe tried to get it passed in the Senate.

EPA's attempts to deal with climate change through regulation of greenhouse gases has been thwarted by Congress, which insists that it, i.e., Congress, has the responsibility to set policy with respect to global warming.  It, i.e., Congress, has steadfastly refused to do just that, with the Republican party leading the fight against cap-and-trade legislation that they once touted as being a "market based solution."  As presidential aspirant and current Minnesota Governor Tim Pawlenty noted, all of the Republican candidates once felt that climate change was an important national and international problem, and that cap-and-trade was their preferred policy solution.  That was until the tea party gained a vocal platform.  Since then the Republican party has been doing flip-flops (or backflips) to change their tune purely for political expediency.


Just today in an Op-Ed in The Hill, former New Jersey Governor and EPA Administrator - and Republican - Christie Todd Whitman said that the Republican party would rue their complicity in climate change denial:

The debate over the future of the Environmental Protection Agency is one of those debates where an ideological agenda, disguised as budget cutting, will result in a short-term political statement at a long-term cost in dollars and health.

Whitman argued that Republican attacks on the EPA are "short-sighted":

Most importantly, Congress needs to consider the long-term cost of short-term decisions. Eliminating the EPA, or vastly curtailing its ability to regulate pollutants as science develops and identifies more threats to our health, may save a few dollars now, but the long-term cost to our society can be great. Using the scalpel rather than the hatchet is much more challenging, but it is the kind of thoughtful approach we need.

Time will tell how much this short-sightedness for political expediency will adversely impact our children and grandchildren.
Posted by The Dake Page at 4:13 PM No comments:

Following many months of uncertainty, and with the deadline for industry submission approaching, the USEPA has issued a Federal Register Notice "amending the Toxic Substances Control Act (TSCA) Inventory Update Reporting (IUR) regulations by suspending the current June 1, 2011, through September 30, 2011, submission period for 2011 reports."  This action was necessitated because EPA till hasn't managed to finalize the IUR modifications rule that they have been working on since last year.

A revised submission period will be announced when the IUR modifications rule is finalized "in the next several weeks."  Once the rule is finalized EPA is promising that companies will have "sufficient time to comply with the updated IUR reporting requirements."  It represents a "one-time" suspension only, and the next scheduled reporting period is expected to be unchanged, i.e., June 1 to September 30, 2016.

According to EPA, "the suspension is warranted, EPA adds, "because it gives affected parties additional time to adjust their behavior in response to other portions of the proposed rule ... and because it averts potential confusion and duplication of effort, which could occur if other portions of the proposed rule, substantively affecting the submission requirements of the IUR, become effective in the midst of the IUR submission itself."

Two European environmental groups have sued the European Chemicals Agency (ECHA) for refusing to release the names of chemical manufacturers and importers of some of the most hazardous chemicals in the EU.  The lawsuit claims "several violations of European laws designed to promote transparency, democracy, and legitimacy in EU policy-making."  ChemSec, a Swedish-based NGO, was joined by environmental law organization ClientEarth in filing the suit.

The chemicals in question are the 356 chemicals on ChemSec's "SIN (Substitute it Now!) list."

The list comprises chemicals identified as Substances of Very High Concern under the EU chemicals regulation REACH. These are chemicals that can cause cancer, damage our reproductive system, or alter our DNA, as well as toxic substances that accumulate in nature with serious and long-term irreversible effects.

Last week I reported that ChemSec had added 22 chemicals to their SIN list based on their potential endocrine disruption effects.  Under the EU chemical control law, REACH, ECHA is required to give special attention to these "substances of very high concern." In their lawsuit, ChemSec and ClientEarth argue that:

ECHA has a track record of being slow to disclose information about chemicals; pressure from the chemicals industry has so far been successful in making delays characteristic of the Agency's approach, despite this policy's clear contravention of REACH and EU principles established for almost 20 years.

According to Vito Buonsante, toxics lawyer at ClientEarth:

The public’s right to information on chemicals is a basic principle of the REACH Regulation. ECHA must not be allowed to withhold information on such a critical issue, especially as it relates to chemicals found in consumer products and present in the EU in large quantities. We have exhausted all avenues to make ECHA meet its transparency obligations and are now compelled to go to court.

More information on the lawsuit can be found on the ChemSec and ClientEarth web pages.

Posted by The Dake Page at 9:15 AM No comments:

Republican Senator Richard Burr (North Carolina) introduced a bill last week that would "consolidate the Department of Energy and the Environmental Protection Agency into a single, new agency called the Department of Energy and Environment (DOEE)."  Senator Burr and fifteen other Republican co-sponsors argue that "the bill would provide cost savings by combining duplicative functions while improving the administration of energy and environmental policies by ensuring a coordinated approach."
Others suggest that this is merely an attempt to further gut the EPA.  Republicans in the House and Senate alike have been trying since gaining the majority in the House last fall to block any efforts of the EPA to engage in the regulation in which current laws mandate they engage.  Most notably has been the attempt to halt EPA efforts to regulate greenhouse gases under the Clean Air Act.
One vocal critic of the bill is Joseph Romm, who writes the blog Climate Progress. Romm was "Acting Assistant Secretary of the U.S. Department of Energy, in charge of the Office of Energy Efficiency and Renewable Energy during 1997 and as Principal Deputy Assistant Secretary from August 1995 through June 1998, and Special Assistant for Policy and Planning from 1993 to July 1995."  So while Senator Burr suggests he seeks to reduce duplicative functions, Romm states:

So I can state with a great deal of confidence that DOE and EPA are utterly different agencies that have no meaningful duplicative functions.  [emphasis in original]

The list of the bill's co-sponsors is a tip-off to the real purpose of the bill.  All have been what Romm calls "global warming deniers" vying for the very conservative voting blocks in their home states.
The fate of the bill is uncertain.  Should the bill gain traction in the Senate, which is barely majority Democratic, it would likely be passed as is in the Republican-controlled House, thus leaving it up to President Obama to sign or veto.  Given the general trend toward fiscal austerity, it is highly likely that such a merger would result in severe underfunding, and ineffectiveness, for both agencies.  Which is apparently the goal given multiple past attempts to restrict each from taking any action on some of the most important long-term issues now facing the US and the world.  It's groundhog day all over again.
Posted by The Dake Page at 1:22 PM No comments: