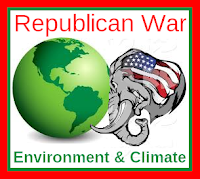 As should come as no surprise to anyone who has been paying attention for the last decade or two, the Republican Party and Republican House and Republican Senate and Republican White House are moving rapidly to remove all public human health and environmental protections.

Even the ones that Republicans once supported.

The new U.S. Secretary of State is Rex Tillerson, CEO of ExxonMobil and with close, perhaps illegal, ties with Russian President Vladimir Putin. He has already begun working to remove requirements for oil companies to report dealings with foreign countries, making it even easier for multinationals like ExxonMobil to engage in backroom deals and corruption. Rather than deal with the usual array of important foreign issues that have bedeviled previous State Department heads, Tillerson has shown an inclination to focus solely on issues that provide benefits to the oil and related industries. He plans to block American innovation to deal with climate change, allow the Russians to exploit oil reserves in the melting Arctic, and allow China to become the world leader in renewable energy innovation.

The new U.S. Secretary of Health and Human Services is Tom Price, a Republican operative and congressman from Georgia who openly opposes women's health rights, Planned Parenthood, the Affordable Care Act (aka, Obamacare), and has anti-vaccine tendencies. He also opposed FDA authority to evaluate the health risks of smoking. Essentially, he is against all the protections he is now in charge of implementing.

The nominee for the new U.S. Secretary of Energy is Texas Governor Rick Perry, whose famous "Oops" moment was when he forgot the third cabinet department he wanted to eliminate. That department was the Department of Energy, the department he has been chosen now to run. A department that Perry falsely believed was all about promoting the oil industry in his home state (the department, in fact, is focused on our nuclear energy program).

The nominee to become the Administrator of the Environmental Protection Agency (EPA) is Scott Pruitt, Attorney General for the fossil fuel-dependent state of Oklahoma. Like fellow Oklahoma Senator James Inhofe, Pruitt has dishonestly claimed climate change is a "hoax," and has spent the last several years suing the EPA to block health and safety rules. He still has open law suits against the very Agency he has been chosen to lead.

Meanwhile, Republicans in Congress have introduced bills to eliminate existing air pollution controls, allow polluters to block public release of pollution records, and repeal many environmental laws, including most recently a bill to repeal the Endangered Species Act. They also have set public land and environmental values to $0 (zero), thus making ANY proposed industrial destruction of public lands a "cost-benefit" simply by being proposed. Other bills to remove public health and environmental protections are in the works.

Republicans in Congress have proposed a bill to eliminate the EPA entirely.

All this is in just a few weeks. Remember, this is the same Republican party who barely worked in the last Congress, refused to debate anything of substance for two entire years while taking the most vacation days in history. Now they are taking advantage of having control of every branch of government to attempt to destroy decades of environmental and human health progress. This includes programs that Republicans once fought hard to put into place.

The fact that the White House is now populated with the most corrupt, inept, and puerile cast of incompetents who fabricate new lies in every breath gives Republicans in Congress the distractions they need to eliminate public safety. While the media are focused on how treasonous the administration has been in its secret dealings with puppetmaster Putin, Congress is quietly chopping apart public protections and selling off the United States to private corporations (who just happen to be Republican campaign contributors).

Republicans hope the public won't notice. Which is why the public must notice. And notice bigly.
Posted by The Dake Page at 11:21 AM No comments: