Book Review – Am I Making Myself Clear? A Scientist’s Guide to Talking to the Public by Cornelia Dean 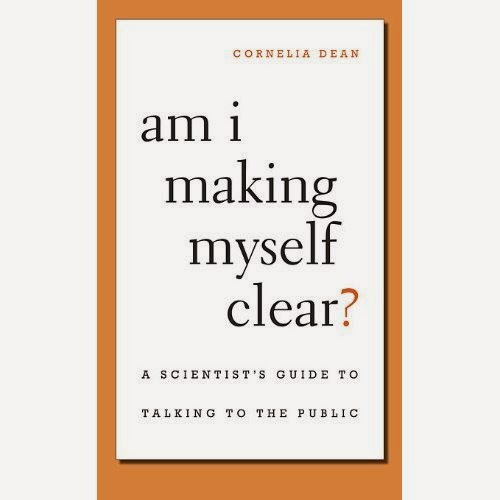 I periodically review books that address the issue of communicating science to the public. Today's book is Am I Making Myself Clear? A Scientist's Guide to Talking to the Public. A much needed book for scientific and non-scientific communities alike. Written by science writer (and former New York Times editor) Cornelia Dean, the book makes the case that scientists need to make “their work more accessible to the media, and thus to the public.” This doesn’t come naturally to most scientists, and so the book gives some practical tips on how scientists can accomplish this goal.
Dean starts with “an invitation to researchers” to put aside their natural reticence and distrust of the media and help themselves and journalists get the key messages of their science across to the public. Because there are plenty of people out there who don’t hesitate to misinform the public about the science in order to protect their own interests (e.g., the climate change debate). In ensuing chapters she provides some insights into how scientists can better “know your audience,” help educate and work with journalists, and how to get the message across on radio and TV, online, and in the courtroom. She also offers tips on writing books, writing Op-Eds and letters to news outlets, and writing about science and technology in other venues.
Two of the most valuable chapters actually have to do with how journalists cover science issues. In “Covering Science,” Dean notes some of the differences in style and communication between journalism and scientific writing. These differences set up an inherent conflict. Scientific researchers view journalists as being superficial, insufficiently concerned with accuracy, focused on controversy, and even “ignorant.” In turn, journalists view researchers as boring, “caveating things to death,” prone to incomprehensible jargon, and incapable of drawing a definitive conclusion. In “The Problem of Objectivity,” Dean discusses the limitations of journalistic “balance” in which one opposing voice is given equal weight to the thousands of proponent voices because both sides are represented. This journalistic trait is exploited by, for example, climate change deniers, who know that TV interviews with one scientist and one naysayer (even if he is a non-scientist) looks to the public like “two sides” of a debate, even when the science is overwhelmingly in favor of one view. Given that it is often difficult for a journalist to know the state-of-the-art of the science, this opens the door for imbalance, ironically, in their effort to provide balance.
Perhaps the most valuable chapter to scientists is “The Scientist as Source.” Here Dean provides some practical hints as to how scientists can best interact with journalists. Again she encourages scientists to put aside their hesitations to speak to the press and to embrace the opportunity to get out a message that accurately reflects both the research itself and the ramifications of that research to the public.
“Am I Making Myself Clear?” is quite readable, as one might expect from a science journalist. I recommend reading this book along with Chris Mooney and Sheril Kirshenbaum’s Unscientific America and Randy Olson’s Don’t Be Such a Scientist. All three books are useful to the scientist to help him or her relate better to the public, and to the public at large to better understand how science works.
Posted by The Dake Page at 8:00 AM No comments: Links to this post