Once in a while on this page we parse the comments of climate deniers. This instructional tool gives honest people insight into the mind of deniers. The biggest thing it tells us is that deniers can be incredibly arrogant in their ignorance.

Let's take a recent example. On December 10, 2015 The Dake Page carried an article called "Yes, Some Scientists...and Politicians...Are Dishonest." The focus of the piece was on a Senate hearing chaired by Republican candidate-for-president Ted Cruz. Billed as an "oversight hearing" and subtitled as "promoting open inquiry," the hearing had only two actual purposes: 1) a showboating scam for Cruz's campaign, and 2) a dog-and-pony show trotting out the usual denier misrepresentation. The article highlighted the bizarre choice of witnesses (a Canadian right wing shock jock, seriously!) and the unfortunate fact that there are a handful of scientists who have become spokespeople for denialist industry lobbyists. You can read the full article at the link above.

One climate denier offered a rather bizarre comment in which he arrogantly suggested he knew more than all the world's climate scientists while simultaneously admitting he had zero actual knowledge himself. He then proceeds to display that ignorance with an arrogance that becomes rather hilarious, but can also serve as an illustration to help honest people see bull for bull. I'll parse it into pieces below, but the entire comment is here, in order, in italics.


So many specific points to address. The most obvious is the conflict in the first paragraph of so of the article, which begins by saying the different opinions are okay, and then proceeds to say that anyone who disagrees with us is obviously dishonest. Disagreement = dishonesty. Really.


By "the first paragraph" he is actually referring to the third paragraph, which begins: "First, let me define dishonesty for the purposes of this essay." Needless to say for anyone who reads the actual paragraph, it says absolutely nothing of the sort the commenter has suggested. The commenter lies. Blatantly. The actual paragraph clearly states that legitimate differences of opinion or interpretation are possible with the same data, but when all the data prove you wrong and no data support your position, you have a problem. Not surprisingly, those who argue they are right despite no legitimate data in support of their position are all associated with denial lobbyist organizations.

The key point of the opening paragraph is that the commenter is immediately and intentionally misrepresenting the article. He's creating a strawman that serves his purpose even though it is blatantly false and not at all what the original article is claiming. Creating strawmen and lying are key tactics in denial.


But what really prompts me to waste my time writing here is the graph. Since I don't see any mention of it in the article, I mean that it does not seem to be something provided by the dishonest people, is it something to demonstrate that the really good people are correct?

So the commenter feels he is wasting his time, and yet chooses to waste everyone else's time by ignoring the entire article he is commenting on and addressing a header graphic that wasn't even the focus of the article.

Distraction and deflection are also common tactics of denialists. When you can't address the topic, simply switch topics. This happens a lot in a tactic called the "Gish Gallop," in which denialists hop from one debunked point to another debunked point. They can't support anything they say so they try to keep their positions moving in the hopes people might not notice (even when their positions contradict each other).


I have now looked at it three times. The scale on the left seems to be related to temperature, is that right? It indicates that the scale is in degrees C, right? So it shows that since roughly from 1910 to recently, that is about 100 years, that the global surface temperature has gone from -.4 to +.6 C, right. There has been a change of one degree in 100 years? (I love the cute little colors, with the recent ones being red hot, gosh that is fearful!!!)


Here is the graph he's refering to. See my further responses on the above piece of his comment after the graph. To see it bigger click on it or click here. 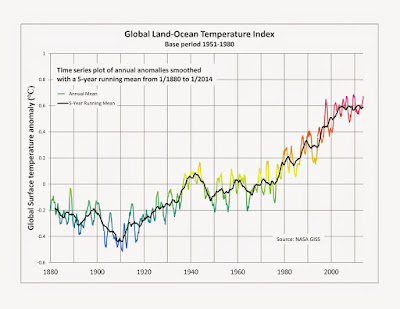 To begin with, this is probably one of the best known graphs in the climate field. The fact that it's clear he has never seen it before and can't read it tells us all we need to know about his level of ignorance. It simply shows the global mean temperature anomaly. It's the standard graph so I won't go into detail here about its meaning; if you don't know what it means you shouldn't be commenting on it.

The goal of the commenter with his paragraph is to demean and dismiss 100+ years of published science, even though he indicates he has no actual knowledge of that science. This is yet another tactic of climate deniers - demean what you don't understand. It saves them the trouble of actually having to be informed while allowing them to convince themselves they are smarter than all the scientists in the world.


Is that really the foundation for the hysteria and claims of doom? All of the computer models that I have seen have each predicted several degree changes in only a decade or so. Many other claims that I have seen have suggested about .6 degrees a year. Every single one of all the predictions, everyone of which has failed to occur, all suggest that the globe is getting much hotter. I think that your graph, which might be accurate or not, isn't good news to the Sky is Falling hoard.

By now it appears the commenter is frothing at the mouth as he sputters out complete fabrication and contradicting himself so fast it's amazing he doesn't even notice. He's simply lying, fast and furious. Given he admitted never seeing the standard graph above, it's highly unlikely that he's seen any, never mind "all the models" he claims to have seen. He clearly doesn't have any clue about models, otherwise he wouldn't have said anything so ridiculously false as "all the models...each predicted several degree changes in only a decade." Seriously? Not even close.

He also ignorantly claims that every model prediction has "failed to occur," which is the standard line fed to ignorant deniers by the fossil fuel lobbyists. Given that models don't predict (they project) and those projections are for long time periods (e.g., the end of the 21st century), and that there are many short-term phenomena that give much short-term variability (see here for the difference between variability and trend), there hasn't been any "prediction" that has reached a period where it could "fail" or "not fail." That said, empirical evidence (i.e, real life observations) suggest that the climate is warming up faster than we expected.

The graph, by the way, demonstrates exactly why there is a need for action.


As to the truth of the issue of the actual temperature of the earth and if man's activities are in any way a cause, I am not a scientist and have no foundation of knowledge or method to reach a conclusion. I am knowledgeable enough to know that the world has been hotter and that change of temperature happens.

Well, at least he admits he is ignorant. That, however, doesn't stop him from claiming all the world's climate scientists, all the world's National Academies of Science, all the world's major scientific organizations, all the 100,000+ peer-reviewed published scientific papers, and physics are all wrong. Because, after all, being ignorant shouldn't stop you from telling experts they don't know their own field of study.


What I do know, based upon years of study at the U of Md, is that what passes in the political sphere today, including the disgrace going on in Paris, is not science. We are seeing political, ideological battles for control of people's lives. That can not be good for any of us, regardless of what the climate is doing. It never has been. Government control has always led to disaster, a disaster far worse than the climate can do to us.


That "years of study at the U of Md" was in philosophy, hence the lack of any understanding of climate science.

His last paragraph does, however, provide the motive for all his earlier paragraphs. The commenter is a dyed in the wool Ayn Rand libertarian, whose fear of "government control" is noticeable in virtually every comment I've ever seen. Like the current snackless anti-government ranchers in Oregon, however, libertarians seem to overlook all the "government handouts" they've enjoyed over the years, not to mention all the government handouts given to corporations, ranchers, and the hugely wealthy in direct violation of "free-market" principles libertarians claim to believe.

In any case, this anti-government paranoia, faux laissez-faire attitude is often cited as the reason why deniers claim the science is somehow "a hoax." Of course, science is published for all to see and not dependent on whether you are paranoid about the government or not.

The science is the science. It's published, it's been scrutinized, and it's unequivocal. Human activity is warming the climate system and that warming is already having significant impacts on sea level rise, ice melting, severe weather events, the economy, human and environmental health, and national security. Those impacts will continue to get worse due to our inaction.

Luckily for this particular commenter and all the rest of the arrogantly ignorant deniers, the Paris climate agreement commits all nations to reducing carbon emissions. This will help slow the increase in global temperatures (as shown on the graph the commenter had never seen before). It doesn't solve the problem - much more needs to be done - but it's a step in the right direction.
Posted by The Dake Page at 9:57 AM No comments: