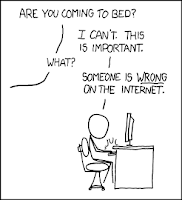 Climate deniers rarely publish papers in scientific journals for the simple reason that they rarely do actual research. Instead, deniers prefer to write Op-Eds in business magazines and newspapers, or offer themselves as pundits on cable media, or just write on blogs. None of these is peer-reviewed, so they can say pretty much anything they want. In rare cases, however, deniers will publish in a peer-reviewed journal. When they do, the published work never stands up to scrutiny. Never.

One recent denier paper caused an uproar because it claimed to overturn decades of actual climate science research, specifically arguing that climate models "run hot," that is, that models show greater future warming than warranted. To no one's surprise, the paper has now been soundly debunked. While once again deniers' claims are found to be false, the episode provides a good illustration for people who want to assess the veracity of denier claims.

First, assess the scientific backgrounds of the authors of the study. The denier study is authored by Christopher Monckton, Willie Soon, David Legates, and William Briggs.

Monckton is not a scientist, and worse, has been repeatedly found to have lied about what scientists and their studies say. He also has been told by the British House of Lords to stop referring to himself as a member (he isn't one).

Soon is an aerospace engineer with a long history of providing denier "deliverables," i.e., publications that meet the needs of his fossil fuel funders. He has co-authored at least three papers that have misrepresented the science.

Legates is a geography professor who often co-authors papers with Willie Soon and other climate deniers.

All of these authors are also affiliated with various climate denial lobbying organizations such as the Heartland Institute. None of them does original climate science research.

Second, assess the quality of the journal. As noted in an earlier post, quality standards in journals can vary. In every field there are journals that are considered to be preeminent, and other journals that are considered second tier. The better journals tend to be more stringent in their peer-review process since they normally receive many more submissions than they have room to publish. The journal for the Monckton et al. paper is a new Chinese journal called Science Bulletin, which most climate scientists had never heard of prior to the right wing promotion of the Monckton et al. paper. That doesn't necessarily mean it is a bad journal, but it does suggest that Monckton and his co-authors (and their corporate promoters) had to search around for a journal whose standards were low enough to allow publication. Deniers, again on the rare occasions that they publish in a journal at all, generally find that only obscure or lower tier journals with limited or no peer-review standards will allow them to pass the first step in the review process. This is why so many denier papers are published in the British policy journal E&E, which is specifically focused on publishing denier papers that can't pass basic peer-review.

Third, assess the quality of the paper. Aye, there's the rub (to paraphrase Hamlet). Whereas it's difficult enough for the public to adequately assess the authors and the journals, it's even more improbable that the public can assess the veracity of the science supposedly being presented.

This last point is worthy of elaboration. Deniers count on the public not being able to evaluate the science. After all, climate scientists, like other professionals, spend many years in specialized education and work experience learning how to do research and evaluate the research of others. That is why deniers so rabidly use their lobbying organizations and paid bloggers to seed the internet with their talking points, knowing that the ideologues will plagiarize and saturate the blogosphere before the paper can be debunked, which it is every single time.

Fourth, assess whether the paper has withstood scientific scrutiny. Whenever a single paper claims to overturn the state-of-the-science based on 100+ years and 100,000+ papers, it's a good bet that the single paper is wrong. Sure, single papers can sometimes catch things others missed, but to overturn that much science it will take thousands of other studies confirming that single paper before we can be assured of its veracity. So if a paper makes what appear to be outrageous claims, search to find out if scientists have debunked it already. While the rebuttal paper described in Nuccitelli's article will invariably take some time to come out, there usually is some discussion of papers on various blogs. Which gets us to the last point.

Fifth, assess the trends of the authors and organizations involved. In other words, know who can - and cannot - be trusted to provide honest information. The public needs to make an effort to be informed about who are the paid deniers and the lobbying organizations that support them. Given that these deniers have long histories of misrepresenting the science, the public can safely assume that anything and everything these people and groups produce will be false. In this case, all four denier authors are from the usual small cast of deniers who constantly offer up unsupportable opinions. All four are associated with denier lobbyists. And the methods of the paper clearly show that they concocted model inputs that are contradicted by actual data and evidence. No wonder their results are unsupportable - they ignored real data and just make stuff up.

It's critical that the public knows who are scientists and who are lobbyist spokespeople. All four authors of this particular paper more close resemble spokespeople than scientists. If they want to be scientists then they have to do actual research and produce actual scientific papers that stand up to scrutiny, just like all legitimate scientists have to do. Alas, they don't. Nothing they have produced ever stands up to even the slightest scrutiny. And it isn't just a case of being wrong, it's a case of consistently misrepresenting the science and intentionally cherry picking the information to reach a desired conclusion. Every single time.

Since the public isn't likely to start reading highly technical scientific journal articles directly, it's important to learn which sources are reliable and which are not.

I'll have more on the methods of real scientists vs deniers in future Exposing Climate Denialism posts.

Posted by The Dake Page at 8:00 AM 2 comments: Links to this post