The Role of Climate Change in the 2016 Elections 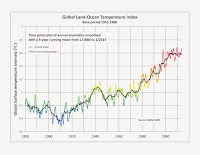 As the 2016 presidential election in the United States gathers steam, the candidate debates show that climate change can play a significant role. Well, depending on which debates you watch.

The sole Democratic debate so far included a brief, but substantive, discussion on climate change. Each of the Democratic candidates noted that they will actively address the problem when elected. Not surprisingly, climate change has been largely ignored in the three Republican debates. Why? Because the entire Republican party has made a decision to deny the science, largely because any honest discussion of policy action could impact their corporate benefactors. Republicans are actively trying to sabotage American interests. In last night's "undercard" debate (called by some the Junior Varsity or Baby debate), the subject of climate change only came up because Lindsey Graham was asked to defend his contrary (to the party) position, i.e., why is he the only Republican willing to admit what scientists have demonstrated unequivocally...that man-made climate change is a significant issue that needs to be addressed.

Much has been said in recent days about another Republican who has more or less admitted the science. Kelly Ayotte, a Republican from New Hampshire, says she will back the President's Clean Power Plan, a set of EPA rules aimed at reducing carbon emissions from power plants. Environmentalists and "No Labels" types are bending over backwards to encourage her and others. Which is a good thing.

It's also a bad thing. Ayotte bills herself as a staunch conservative and would not be coming out in support of the CPP except for the fact that she faces a stiff challenge for reelection from current New Hampshire Governor Maggie Hassan. While it's nice to get a Republican to voice their support for anything, we have to acknowledge that had she not done polling that shows she would lose her seat, she would be just as adamantly and dishonestly against the CPP as every other Republican. The Republican Senate leadership has given her permission to "support" CPP only because they don't want to lose her seat. Should she retain it, she will ditch any pretense of support and vote against the CPP just as she is told by Republican leaders.

So she isn't really supporting it at all; she's miming the words to get reelected.

Unfortunately, this is how Washington works. Congress knows that people have infamously short memories. This is why politicians can say things one day that contradict what they said the other day without fear the voting populace will even notice. A good sound bite is better than an actual set of principles. That sounds cynical, but it's reality.

What Ayotte's lip service does show, however, is that climate change can play an important role in the 2016 election. The fact that a Republican has to "go against" her party to admit even the most basic scientific reality says a lot about the Republican party, and the power of the climate change issue to encourage dealing with that reality. As mentioned above, this isn't real support by Ayotte, merely a politically expedient maneuver to trick New Hampshire citizens, but if enough of the populace requires all of their representatives to engage in honest discussion of policy options to address the reality of climate change, well, public opinion can move mountains.

The discrepancies between the parties should also play a much more important role once the nominees are selected. In the party vs. party debates, the Democratic nominee will present their view of how to deal with the science, while the Republican nominee will be forced to either defend the denial of science or explain the incredulous flipflop of "accepting" the science and proposing a solution.

So we see how powerful this issue can become in 2016. Republicans will not only have to defend their denial of science, they will have to defend their attacks on their own market-based plan. Meanwhile, the Democratic candidate can 1) showcase the dishonesty of the Republican history on the issue, and 2) offer up additional policy options that expand on the actions already achieved under President Obama. Most of the world's nations have already issued their commitments for the upcoming agreement to be signed in Paris in December. That will be in place prior to the next President taking the oath of office. It will be hard for a Republican to defend reneging on our commitments to ourselves and world, no matter how much money the Koch's and fossil fuel companies spend on candidates.

And that's why climate change is so important in this election.
Posted by The Dake Page at 7:28 AM No comments: