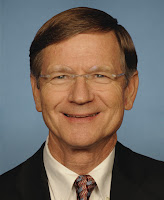 Republicans are dishonestly anti-science. This is not a partisan opinion; the empirical evidence of this is overwhelming. This week saw more examples, from the Republican White House's rollback of environmental and health regulations and proposed decimation of science agency budgets, to the Republican House's passage of a bill to restrict EPA's use of science, to the falsehoods pushed by Oklahoma Republican and now EPA Administrator Scott Pruitt on the Sunday talk shows, to the dishonesty employed by Texas Republican Lamar Smith in his "climate change" hearing held yesterday, March 29.

Republican dishonesty on science issues (and virtually every other issue) is not new. Oklahoma Republican Senator James Inhofe is famous for his fact-free dismissal of 100+ years of unequivocal climate science as a "hoax." As of this writing, the current resident of the White House mimed this feeling, stating without any evidence or rationality that climate science was a "Chinese hoax." Another Republican Congressman, Texas's Joe Barton, famously apologized to the CEO of BP for bothering them with having to clean up their multi-fatal, multi-billion dollar Deepwater Horizon explosion and oil spill disaster.

It's no accident that Republicans lean on anti-science politicians from fossil fuel-dependent states like Oklahoma and Texas to lead their "science" committees.

Yesterday's "science committee" hearing led by Texas Republican Lamar Smith was framed as being an evaluation of the "assumptions, policy implications, and the scientific method" as these relate to climate science. Not surprisingly, Smith's opening statement was filled with platitudes and falsehoods designed to attack the very scientific method he proceeded to lecture scientists about.

In fact, virtually nothing Lamar Smith said was true.

This is intentional. As we saw in the campaign and since inauguration day, Republicans have turned their dishonesty up to 11. Republicans learned long ago that if you lie assertively and repeatedly people will eventually start believing it. That is why large percentages of Republicans still believe that former President Obama was not born in the USA despite the obvious falsehood of that claim. The overt lying is not just a Republican tendency, it is a Republican strategy. They do this because, combined with gerrymandering and voter suppression, it works. They now have control of all branches of government.

This is what Republicans have done with that power with respect to science:
In Lamar Smith's opening statement he revealed some of the dishonest tactics used by science deniers. He followed the lobbyist handbook to the letter, reading a script written by staffers (using language provided by anti-science lobbyists). He said that actions must be based on "sound science," which of course is true, but "sound science" is an Orwellian phrase invented by anti-science tobacco lobbyists to attack the overwhelming consensus of actual sound science that showed smoking causes cancer. He goes on to accuse climate scientists (calling them the lobbyist-approved fake term "alarmists") of "working outside of the principles of the scientific method."

This is rather ironic given that Lamar Smith is a "Christian Scientist," another Orwellian clash of terms for a religious sect that believes illness is simply a failing of faith and correctable solely by prayer. However, this anti-science background is likely less important than the fact that his leading campaign donors are the oil and gas industry, ExxonMobil, and the fossil fuel Koch brothers. Again, the fact that the Republican chairs of key science committees are usually from fossil fuel dependent states is not an accident. To paraphrase Ronald Reagan's famous retort: "I paid for this politician."

Smith goes on to accuse climate scientists of making "nothing more than wild guesses." This is, of course, patently false as the 100+ years of unequivocal science has been exhaustively documented. Smith knows this is false, yet he chooses to say it anyway.

And that is incredibly dangerous to America's future.

[Photo Credit: Lamar Smith (R-Texas) Official Portrait, Wikipedia]
Posted by The Dake Page at 10:22 AM No comments: Links to this post