The Hockey Stick and the Climate Wars by Michael E. Mann - A Book Review 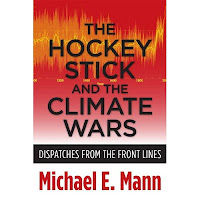 If you ever wanted to know how it feels to be hunted by a pack of rabid wolves, Michael Mann’s The Hockey Stick is the book for you. The “hockey stick” graph became an icon in the Climate Wars, at least in the sense that it gave a target for the climate denialist industry to focus on in their efforts to deny the science. For those who are confused the bottom line is this – the hockey stick is robust, joined by a dozen other graphs into a veritable hockey team, and represents one small piece of multiple lines of evidence that demonstrate our planet is being warmed by human activity.

Mann begins by discussing how the hockey stick was “Born in a War” during the mid-1990s. As his own research was just beginning to develop, the climate denialist industry was already hard at work attacking other scientists like Ben Santer in what Mann calls the “Serengeti strategy.” In “Climate Science Comes of Age” and “Signals in the Noise” Mann takes us through the state-of-the-science and how his emerging research relates to the research of other scientists, including future co-author Raymond Bradley. In “The Making of the Hockey Stick” Mann gives us both the history and the science that led to the seminal paper commonly referred to as MBH98 and its follow up paper MBH99. The hockey stick papers. In short, the hockey stick is merely a reconstruction of northern hemisphere temperatures going back a millennia or so and based on a range of proxy data, that is, data from corals, ice cores, tree rings and other sources of long-term information that are used to define atmospheric temperatures. This one (relatively) simple graph was the result of “a substantial body of work.”

But as the science developed so too did the attacks on that science by fossil fuel industry lobbyists and their allies. The hockey stick graph became part of the 2001 Third Assessment Report of the IPCC, and was perceived as a major threat to the denialist industry’s interests. It was actually only one of three figures used in that IPCC report showing the same sort of pattern of historical temperatures. As Mann discusses, the MBH papers didn’t even attempt to establish causality, but this fact – like most facts – didn’t seem to slow the denialist desire to set up the hockey stick as THE pedestal of climate change…and then proceed to try to tear it down.

Mann goes on in ensuing chapters to discuss the “Origins of Denial” (e.g., going back to the tobacco industry’s “doubt is our product” strategy), and the various critiques of the hockey stick. Some of the more interesting chapters have to do with the political attacks on Mann and his co-authors. The chapter “Say It Ain’t So, (Smokey) Joe!” refers to Joe Barton (“I apologize to BP” for holding them accountable for the Deepwater Horizon spill). Barton called a House hearing on the hockey stick based solely on an opinion piece written in the Wall Street Journal. Barton was universally chastised for abusing his position to carry on a political intimidation. Even other Republicans like Sherwood Boehlert and John McCain rebuked Barton’s clear attempts to harass scientists.

In “A Tale of Two Reports,” Mann relates the findings of two evaluations of the hockey stick paper – one by the National Academy of Sciences (NAS) commissioned by Sherwood Boehlert, and one by a statistics professor named Edward Wegman commissioned by Joe Barton. The NAS review was conducted by a team of highly qualified scientists and looked intensively at the research. The Wegman team consisted of Wegman, one of his graduate students, and one other co-author. The NAS review universally reaffirmed the veracity and robustness of the MBH hockey stick. The Wegman report disagreed. Not surprisingly, evidence later determined that Wegman had collaborated with denialist organizations, had passed off much of Stephen McIntyre’s faulty work as his own, and as much as 1/3 or more of the Wegman report had been plagiarized. Despite reaffirmation by the NAS, the addition of a dozen other independent reconstructions all showing the same thing, and voluminous evidence from multiple lines of investigation all showing that the hockey stick accurately represents the state-of-the-science, the denialist bloggers still repeat the false talking points coming out of Wegman’s ethically-challenged and factually-deficient report.

There is much more in the book, of course, and along the way Mann also discusses the ubiquitous inability of any denialist argument to stand up to even the most basic scientific scrutiny. He discusses the cadre of industry-sponsored blogs that serve as an echo chamber for denialist talking points, even long after they have been thoroughly debunked many times (including, for example, the falsehood that the hockey stick is broken).

Mann further discusses attempts to intimidate climate scientists in chapters called “Heads of the Hydra” (whenever one false talking point is debunked, two more false talking points are tossed out and/or recycled from the ones already debunked), “The Battle of the Bulge” (about how the denialist industry has made a last ditch effort to harass and intimidate scientists now that the science has become undeniable), and “Climategate: The Real Story” (how the denialist industry coordinated an orchestrated disinformation campaign). Mann’s recounting of how the “hide the decline” false talking point required the convenient omission of 23 words and the combining of two completely unrelated topics for the denialists to create their fake scandal is enlightening.

The final chapter “Fighting Back” is about how climate scientists have started to defend themselves and the science against the vicious harassment and intimidation of the climate denial lobby. One example he lists is Virginia Attorney General Cuccinelli’s witch hunt that was working its way up through the courts. Just this past week the Virginia Supreme Court ruled that Cuccinelli had no basis for pursuing what all parties acknowledge is nothing more than a politically motivated attempt to intimidate scientists who are doing research politicians find ideologically inconvenient.

In an Epilogue, Mann notes that his views of the “role of the scientist” have evolved over the last 10 years. Previously Mann, like most scientists, believed the role of the scientist was to do scientific research and that others should take on the duty of communicating it to the public. Now he believes that it is a responsibility of all scientists to ensure that their science is accurately communicated, and sometimes that means being out there to correct the intentional disinformation pushed by the science denial lobby. All scientists should consider this advice.

I highly recommend this book.  I also highly recommend the book Global Warming and Political Intimidation by Raymond S. Bradley, the “B” of MBH98/99. Like Mann, Bradley has experienced first hand the “Serengeti Strategy” of harassment.

Photo Credit and to order the book: Amazon.com
Posted by The Dake Page at 7:23 AM